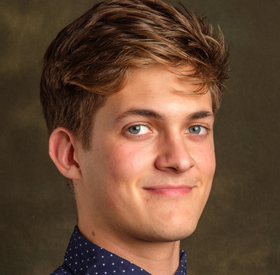 Noah was born in Harrisonburg, VA, and recently graduated from James Madison University with his BA in Musical Theatre. Noah’s professional credits include performing at the Tony Award winning Infinity Theatre Company in the summer of 2019. Noah also assisted in developing Mark Chimsky and Zev Burrows’s new musical, The Pledge, through the 2019 Madison New Works Lab. Noah has spent significant portions of his life moving around, and is fascinated by finding commonalities between individuals of otherwise completely different backgrounds through the medium of the performing arts. Noah is also intrigued by theatre and the performing arts’ vast range of capabilities outside of being exclusively used for entertainment purposes. Noah’s dreams for the future include performing on larger scale productions in New York, and eventually working to develop his own company which will create Theatre for nationwide societal change. The past couple years have brought out unprecedented polarization between the citizens of the same country, and Noah hopes to one day use Theatre as a mirror for American society, ultimately striving to create cultural mediation and reflection through the Performing Arts. Noah intends to use these values in his work on the development of the Elkton Theatre.