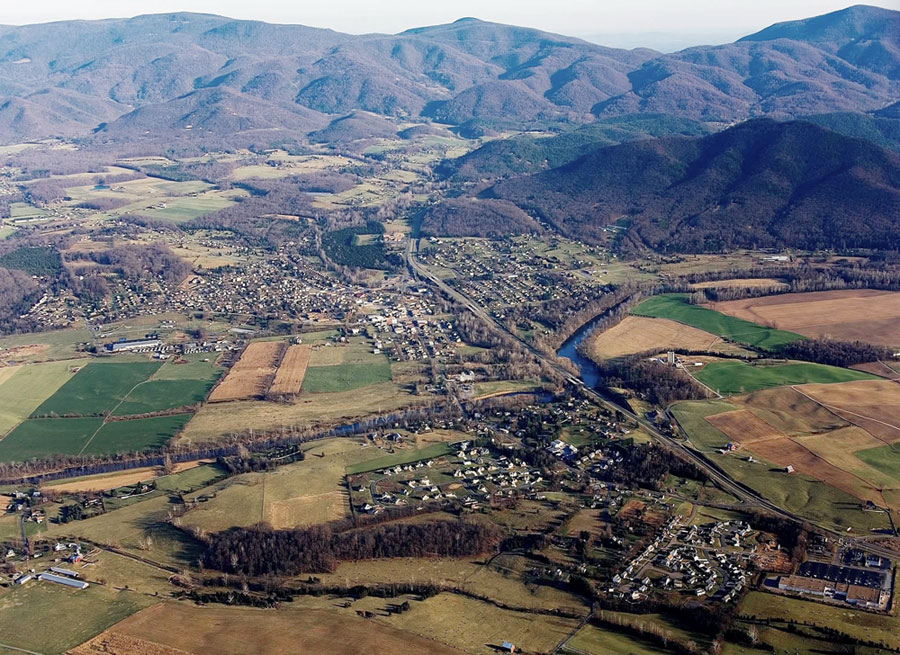 HISTORY OF THE ELKTON AREA

The Elkton area was one of the first in the Shenandoah Valley to be settled by colonists. Before the 1700s, migratory Indians ranged throughout the Valley and were its only human inhabitants. In the 1700s, European settlers began branching farther westward. General Alexander Spotswood and the Knights of the Golden Horseshoe crossed the barrier of the Blue Ridge Mountains in their famous 1716 expedition and claimed the area for Great Britain. They apparently crossed at Swift Run Gap, so their first views of the Valley would have been of the area near Elkton.

The first influx of settlers to the Valley, however, were German immigrants, who followed the Valley south from Pennsylvania. Adam Miller (Mueller), born in 1703 in Shreisheim Germany, is credited with establishing the first permanent settlement in the Shenandoah Valley. He settled first north of Elkton near the Rockingham County-Page County line in approximately 1726, but later moved to the banks of the Shenandoah River near the current Town. His cabin was still standing in 1958. Miller lived until 1783 and his descendants held the homestead well into the twentieth century. The Millers and two other families, the Harnsbergers and the Kites, each held large land grants near Elkton.

For several generations, there was not much additional settlement in the area. William Kite's land grant contained what is today the center of Town. The Millers held the land to the north and the Harnsbergers to the south. The Harnsbergers, originally from Switzerland, were living in the area by 1751. The Kites also were an influential family. The land grant to William Kite was dated 1801 and contained the Lithia Springs, which are still owned by descendants and serve as a partial water source to the Town.

It was not until 1821 that there were enough settlers to warrant building the Elk Run Liberty Meeting House. By the mid 1800s, the area was called Conrad's Store. The store was run by Stephen Conrad, who had married a descendant of Adam Miller. This two-story log building still stands on business Route 33, at the corner of Shenandoah Avenue and Spotswood Trail.

The settlement received its first post office in 1866. Called Roadside, it stood just east of the current Town limits. From 1870 to 1880, the post office was called Elk Run. Finally, in 1881, the name was changed to Elkton.

The Shenandoah River was the early transportation route. Boats carried goods down the river to Georgetown or to Harpers Ferry. These boats, typically 9 1/2 feet wide and 76 feet long, would be sold for lumber at the end of the trip and the crew would walk home. The last known boat trip from the area was in 1889.

Milling and tanning were two prominent early industries. From approximately 1841 to 1869, a tan yard was operated on Elk Run. The tan yard, built by Will Kite, was destroyed by Union troops in 1864 but rebuilt the next year.

In 1870, a terrible flood caused much damage in Elkton. The following year, John Cover, from Philadelphia, Pennsylvania, started a tannery that became the Town's first major industry. The tannery stood on Rockingham Street. It was expanded in 1917 and a year later was processing 300 hides a day and employing 200 people. It was sold to Continental Shoe Company in 1923 but burned in 1925 and was never operated again.

In the spring of 1862, Stonewall Jackson's Valley Campaign brought the war close to Elkton. At that time, the settlement contained only a few homes and other buildings. In preparation for the coming battles, the Confederate army camped near Conrad's Store, with General Jackson headquartered at the Kite homestead and General Ewell at Dr. S.P.H. Miller's. Troops set up camp at a number of sites, including near the Town spring and near the current Elkton Middle School. The Elk Run Meeting House (dismantled in 1910) was used to keep prisoners.

Jackson chose this strategic location at the foot of Swift Run Gap and flanked by Massanutten Mountain because it would enable him to fend off attack from much larger Union forces yet threaten their rear if they tried to advance south toward Staunton. Several battles were fought in eastern Rockingham County. Just before the battles of Cross Keys and Port Republic, Jackson ordered the bridge over the Shenandoah at Conrad's Store burned. After Jackson left the Valley, Union troops continued the destruction in the area, burning Kite's woolen mill, Jennings' flour mill, and numerous barns.

Like the rest of the Valley, Elkton had much to recover from when the war ended. Industrial and farming structures had been destroyed. Money and materials were scarce. Not until the coming of the railroads did new opportunities open up to the Valley.

The railroad sparked much of the development of Elkton. Starting in the late 1860s plans were made to provide rail service from the Potomac River to Salem, Virginia. This program, however, was thwarted by the financial depression in the 1870s. Dr. S.P.H. Miller was influential in promoting the development of a railroad to transport agricultural goods and iron ore from the deposits which had recently been discovered in the area. In 1881, the line from Hagerstown, Maryland, to Waynesboro, Virginia, was opened. In 1897, the Chesapeake and Western opened track from Elkton to Bridgewater. After 1938, the service was expanded to Staunton on the old Southern Railway lines.

The Elkton area is noted for its springs. In the late 1800s, as health resorts and medicine shows became popular, people flocked to the springs. Captain H.A. Kite capitalized on the excellent waters that flowed from the spring on his property and which could now be shipped by railroad. The Elk Lithia Water Company was formed in 1891. Business faded after the turn of the century, however, and the rights to the spring reverted to the Kite family. In 1928, the Town acquired the water rights. Bear Lithia Spring, on land sold by Adam Miller to Jacob Bear, supported a hotel and provided water sold far and wide by the Bear Lithia Spring Company (1906-17), later named the Great Bear Company.

The coming of the railroad brought a swarm of speculation up and down the Shenandoah Valley in the late 1800s. Development companies formed and prospective towns were laid out. Many of these "boom towns" never came to pass. Others, like Elkton, were built, but on a less grandiose scale than planned.

The Elkton Improvement Company, chartered in 1890, took as its goal the conduct of mining and business operations in Rockingham, Page, Greene, and Albemarle counties, the laying out of towns, and the establishment of governments for these towns. Largely through the diligence of the company's president, Dr. S.P.H. Miller (1835-1895), Elkton took shape. The 1890 plan for Elkton drawn by A.C. Walker contains many identifying features of the Town today, although not the entire plan was developed. For example, the plan calls for a "Riverside Park" just south of where Spotswood Avenue crosses the river. The plan envisioned a densely populated town laid out in grids punctuated by diagonal thoroughfares and accommodating the curves of the Shenandoah River and Elk Run. These tiny lots are the basis for today's tax parcels.

The 1890s saw a profusion of industries in the Town, including mills, factories, machine shops, wagon works, tanneries, and canneries. A manganese mine was operated from 1891 to 1902 approximately two miles east of Elkton. In addition, Marshall's mill, built in 1876 and powered by steam, produced everything from flour and feeds to apple butter. The mill stood on the banks of Elk Run and its mill race gave Water Street its name.

The first Town newspaper, "the Elkton Index," was published in 1891.

Like many boom towns, Elkton featured a major hotel. "The Elkton," opened in 1891, was designed by the famous New York architect Stanford White and had 120 rooms. It became a popular summer resort. The opening of the Shenandoah National Park in 1936 and a new name, "the Golden Horseshoe Tavern," extended the hotel's popularity beyond the resort era. In 1941, the hotel was modernized and renamed "the Gables Hotel." It was closed in 1956 and razed two years later. The Route 33 bypass cuts through the location where this hotel stood.

The first church in the town was Elk Run Liberty Meeting House, which was open to all Christian denominations. In 1821, leaders of the community, including Henry Miller, Sr., Jacob Conrad, George Baugher, Henry Miller, Jr., and Jacob Harnsberger directed that a log building be erected with dimensions of 30 feet by 36 feet. George Conrad, Jacob Miller, Sr., and Jacob Bear were the trustees, and Henry Monger was hired to build the building. This building became the First Methodist Episcopal Church.

In the latter half of the nineteenth century, a number of churches were established in Elkton. A second church was built on the site of the First Methodist Church in 1896 and was remodeled in 1921. The Presbyterian Church organized in 1898 and erected a building in 1899. The United Brethren organized a Sunday School in 1894 and built a church in 1910. The Free Pentecostal Church was built in 1931 and the Catholic Church was built in 1953. Mennonites had settled in the western part of Rockingham County by this time and pursued missionary service in the eastern part of the County near Elkton in 1948. As part of their mission, they built an evangelical church on Stuart Avenue.

When the boom ended in 1896, one citizen in particular became the driving force for continued progress in Elkton. James E. Leebrick helped to form the Bank of Elkton and was its first president and pushed successfully for the incorporation of the Town in 1908. At the time, the Town had approximately 400 residents and contained one of the Valley's foremost health resorts.

The Elkton Lithia Bottling Company formed in 1907 as a soft drink bottling company. It was the forerunner to the 7-Up Bottling Company, which operated until the early 1980s, and the current business, Flory Beverage Distributors. In 1921, the Maryland Company opened a garment manufacturing company, which later became the major employer Blue Bell. In the early 1920s, Water Street was known as "tenpin alley" because of the tenpin alley and pool halls operating there.

In April 1922, a fire destroyed most of the Town's business district. In the aftermath, it was clear that the water system, which had proved inadequate for fighting the fire and would not support much more growth, needed to be improved. In November 1923, the Town issued $35,000 in bonds to purchase the water rights from Elkton Lithia Water Company and improve the water system. In 1925 another terrible fire struck, this time taking the tannery that was Elkton's major industry. Elkton's volunteer fire department was formed in 1927.

In 1930, construction on Route 340 was completed to Elkton. The dedication of the Shenandoah National Park in 1936 brought Franklin D. Roosevelt to Elkton.

In 1941, Merck and Co. located a plant just south of the Town and has been a major employer for the area ever since. East Point Turkey, Inc. was established in Elkton in 1944 by Chester Housh. This local venture was a harbinger of what was to become the major industry for Rockingham County. By 1957, East Point was growing 500,000 turkeys annually. In 1956, Elkton Milling Co. moved into new quarters in the first fully pneumatic equipped flour mill in the country. This mill had a long history in Elkton, starting across the river as Marshall's woolen mill. It was converted to a flour mill after the Civil War. In the 1920s and 1930s it was run by E.P. Louderback, who also ran a small milling operation in Town beside the railroad. In 1956 the two operations were combined into the new building in Town.