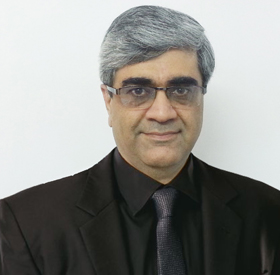 Mr. Ahuja began his career in the nuclear power industry in the US in 1982. He continued working with high rise buildings with reputed firms like Skidmore Owings & Merrill and then entered the hospital industry where he worked with both structural and non‐structural building components to keep hospitals functional after a major earthquake.

Since 1993, Mr. Ahuja has been serving as a Director of Ahuja Consultants Pvt. Ltd. He is been involved in the structural design of a broad spectrum of projects including institutional buildings, factories, commercial and residential buildings, infrastructure projects, rehabilitation and retrofit of buildings. Some extremely challenging, including base isolation problems, institutional projects, residential, shell structures, cranes, elevated water tanks, seismic retrofitting, post‐earthquake evaluation, designs as per Japanese code, IBC, FEMA, Australian and Indian codes have been handled.